Destiny Meta is a resource hub for Activision and Bungie’s Destiny 2, that allows the community to build the “meta” meaning the most overpowered setups the game has to offer. While playing the game you have chances of finding "Loot" allowing your game play to change drastically. Destiny Meta gives you the options of building PvP and PvE guardians on the web to share among the community. The community will then have a “Like” system where the most popular will be ranked from top to bottom or by a filtering system.

WHY IS LOOT IMPORTANT?

Destiny Meta was a concept project that I came up with while I was three months into playing Destiny 2 with a friend. It was a moment where I was beginning to make leaps and bounds with my character's progression. With those leaps, came massive quantities of loot. I now had so many different weapons and armor pieces, but no idea which one was "meta" or the best in the game. I found myself searching Reddit and YouTube for hours trying to get other peoples' opinions, but I wanted this to be so much simpler than that. Hence the creation of, Destiny Meta.

Bungie, Inc, is an American video game developer located out of Bellevue, Washington. It was established in 1991 by Alex Seropian, who later brought in a programmer named Jason Jones. Bungie is now the independent owner of Destiny 2 after their recent separation from their publisher, Activision.

TLDR: The company that created the Halo Video Games.

Try to simplify Destiny 2's Character Build System for users who don't want to load up the game or scavenge through the internet to find an answer. Mimic the game's layout and find a design style that is modern, utilized by millions in the world.

Destiny 2 is an online-only multiplayer first-person shooter video game developed by Bungie and published by Activision. It was released for PlayStation 4 and Xbox One on September 6, 2017, followed by a Microsoft Windows version the following month. It is the sequel to 2014's Destiny and its subsequent expansions. Set in a "mythic science fiction world.

This part was very important for my learning process about online character building and how they function. I wanted to see what a few websites have been doing so that I can see what works and what doesn't. A big takeaway here was learning about how the items are displayed on the web in the Destiny Item Database.

I'd like to give you a better visualization of what a brand new gamer might likely experience through the lens of a veteran player named "BigOhMega" while playing Destiny 2. Players who often transition from a PVE (Player VS Enemies) relaxed environment, to a PVP (Player VS Player) competitive environment, might experience these emotions below. This might also give you some insights as to why someone would use my platform, Destiny Meta. I'll try to describe BigOhMega's Journey through as much emotion in not only my writing, but in my choice of emojis. Heck, this person might be an accurate representation of you someday!

The user has now picked up a free to play game with loot, epic fantasy elements, magic, lore, and a vast world to explore.

The user decides to take their game play experience slow by playing with a friend through the campaign story line. Things are going well, they've told all their friends how amazing this game is.

During this user's time playing solo or with a friend, they have now acquired some decent weapons and armor (so they think). The dopamine has trickled nicely into their system and they are hooked.

The user is still on a high after acquiring decent loot consisting of exotic weapons with decent rolls. Their character is looking LIT! The first few matches go their way, but only until the matchmaking system figures out where they "belong" on the totem pole.

The user has now come to the realization that they have crossed paths with better players with more powerful armor and weapons. They thought the game was fair and balanced, but it wasn't. Amidst the chaos, they realized a trend. They kept dying to that same person with a specific load out.

Curious by their nemeses choice of setups, they've now started researching some of the best PVP Setups in Destiny 2. This is often referred to as the "Meta" of the game. Their choices are Reddit and YouTube; until my product starts to mess with the natural waters.

"There is a huge opportunity for this project to pave a path to glory in the crucible (PVP), the likes of which has never been seen. 🤡"

When creating a project like this, my brain sometimes starts firing on all cylinders. Ideas come and go, so it's very important for me to get my ideas out and onto something that I can see, visually. Often, I'll expand upon these ideas as my projects go along. 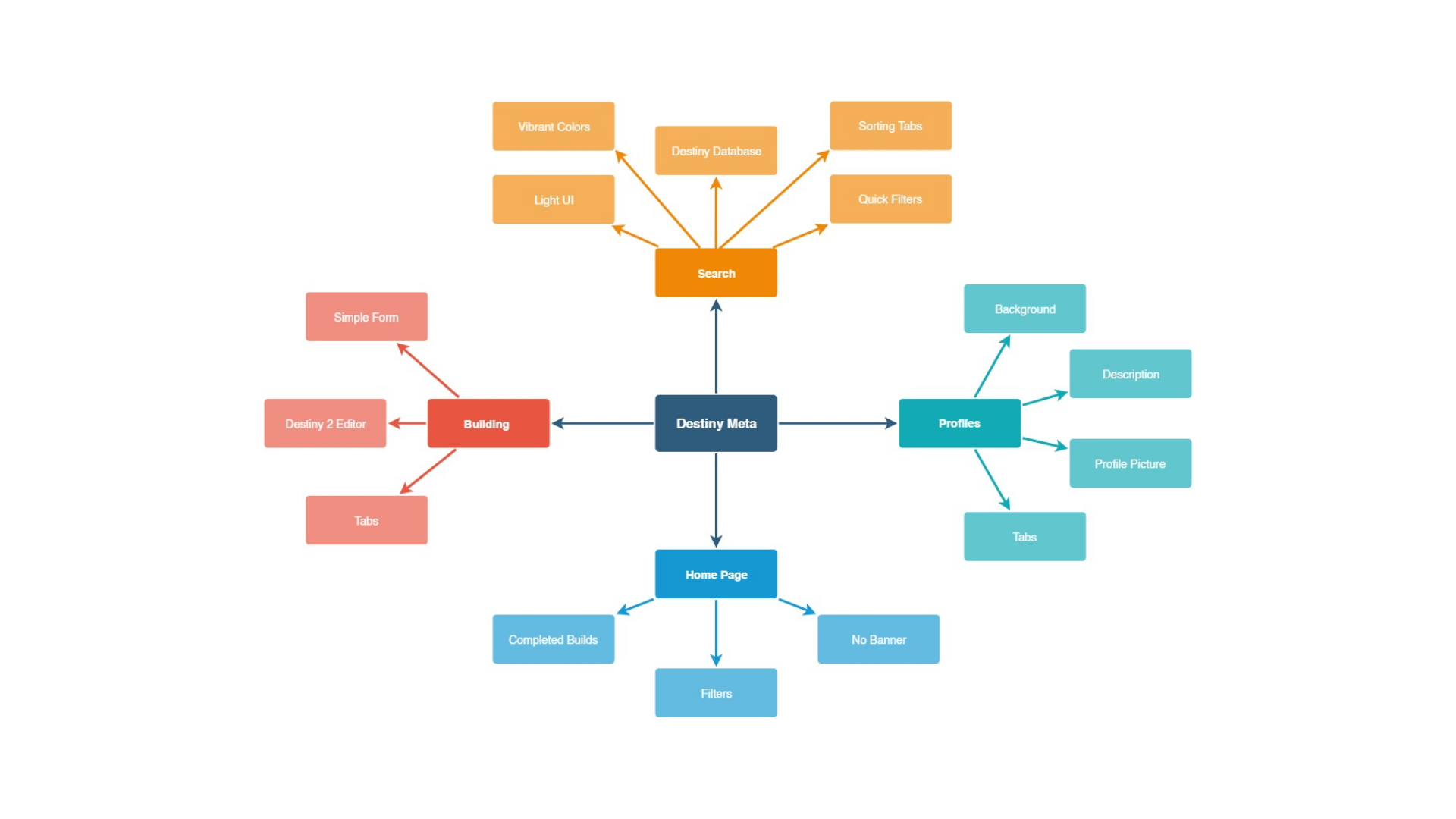 Another important aspect of my design process is creating low fidelity wire-frames. This allows me to get the structure of a project in my design programs without having to worry much about colors, typography or the final touches quite yet... I have found wireframes to allow me to become very efficient throughout my process. 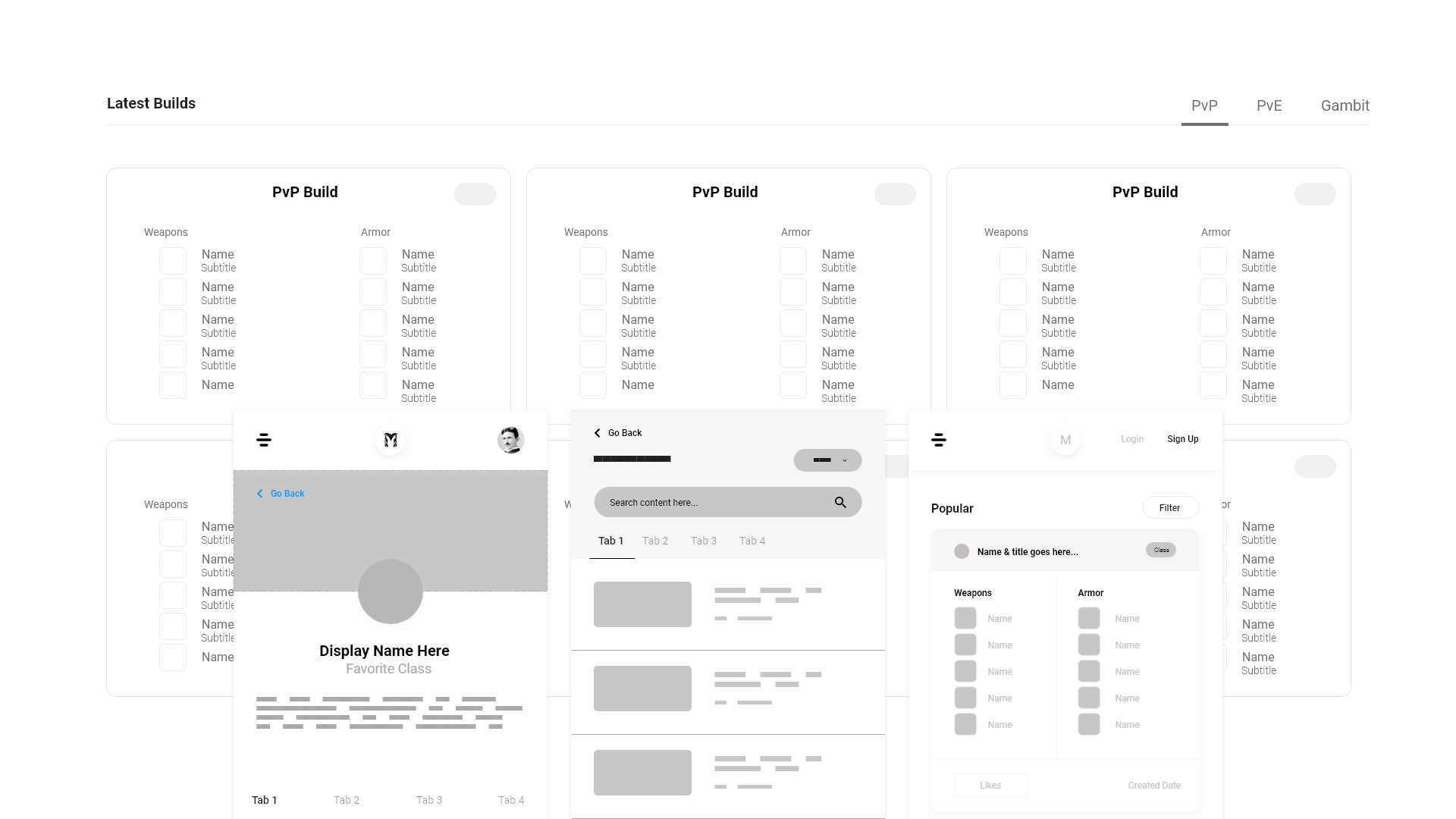 This is the part of my design process where the visual design is completed. This is where I find out my visual design languages, solidify my desired color scheme, typography, iconography and the overall look and feel of the project. You'll notice I've provided several iterations as that is something I LOVE doing while working. 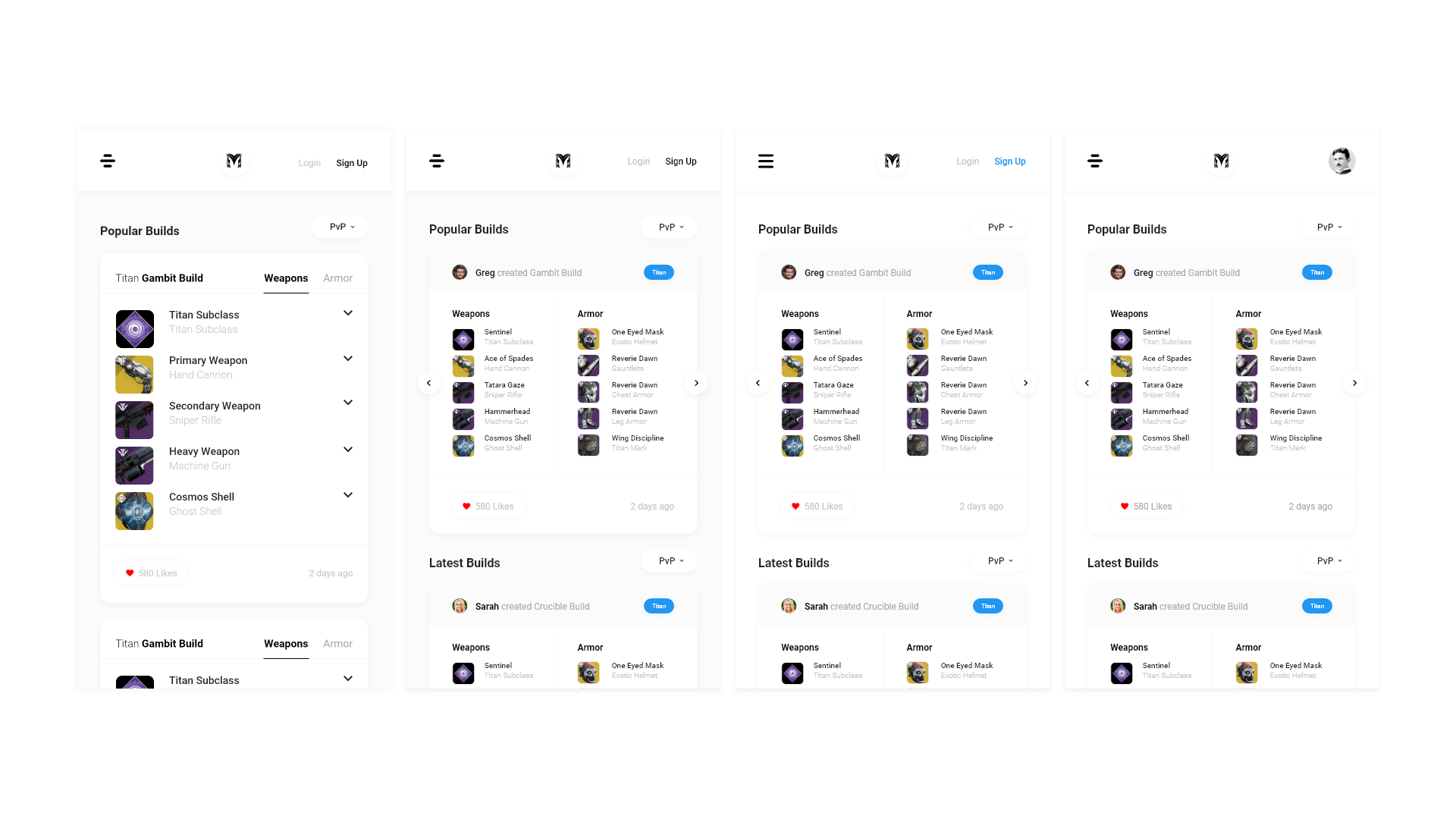 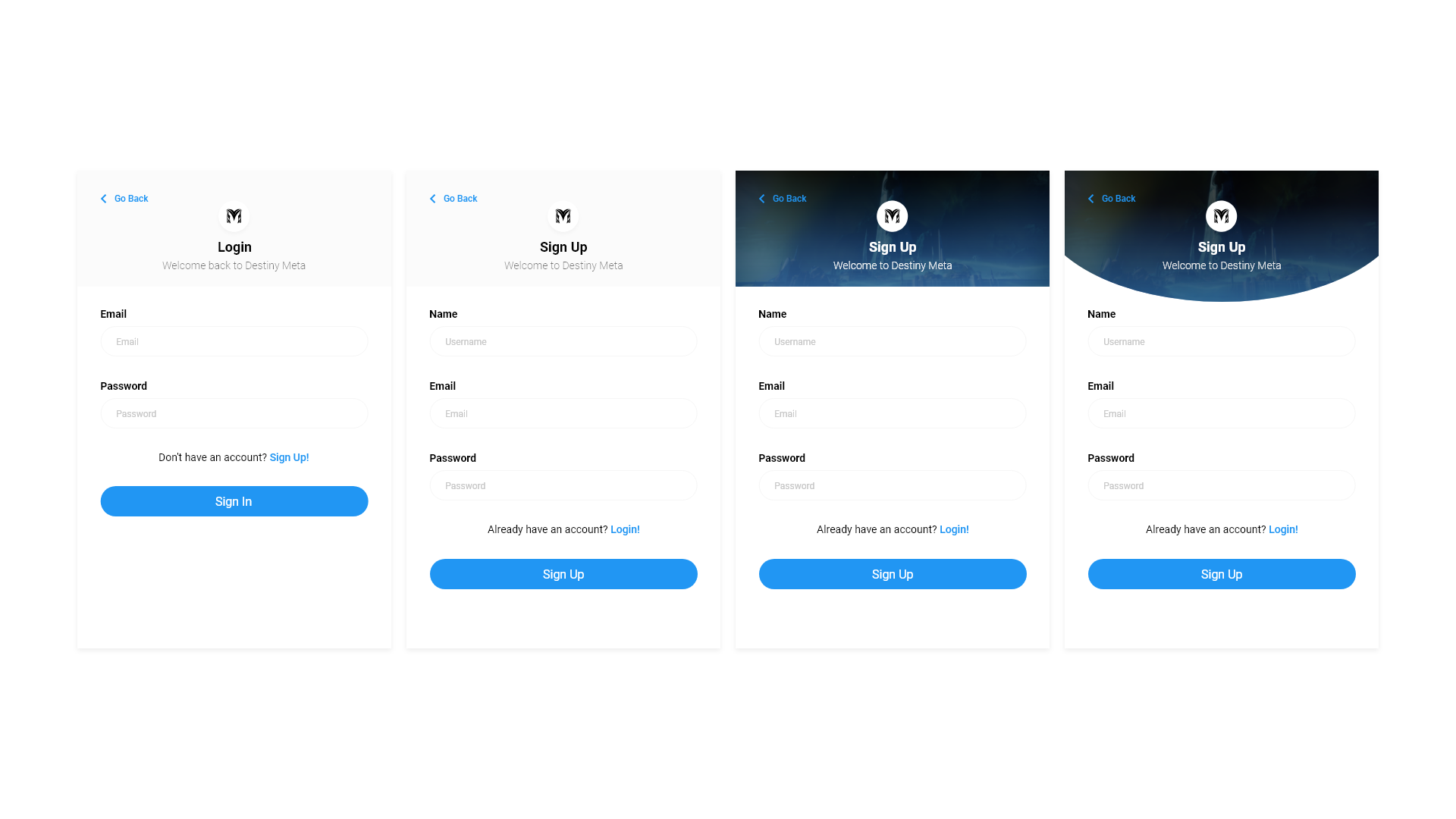 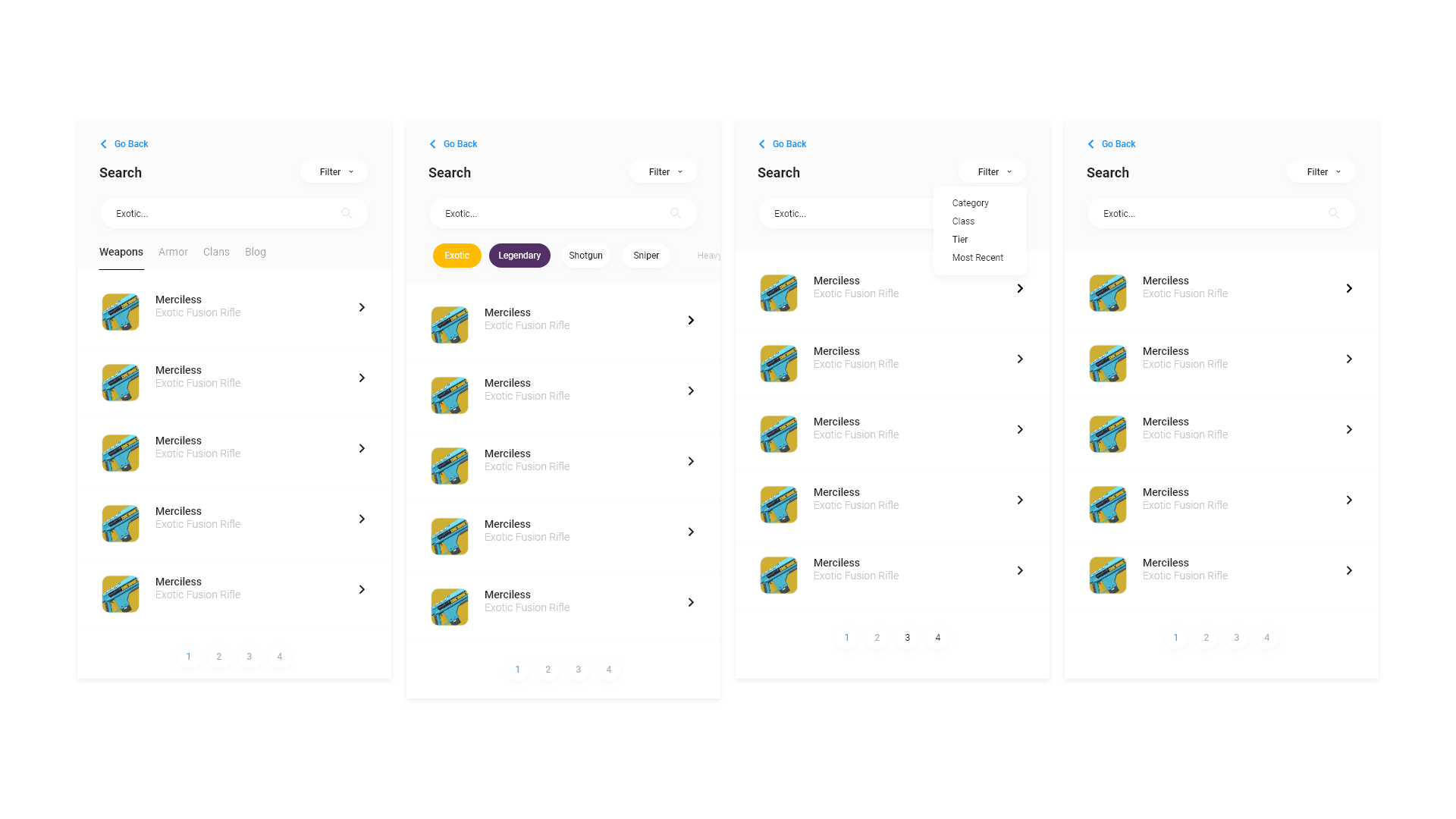 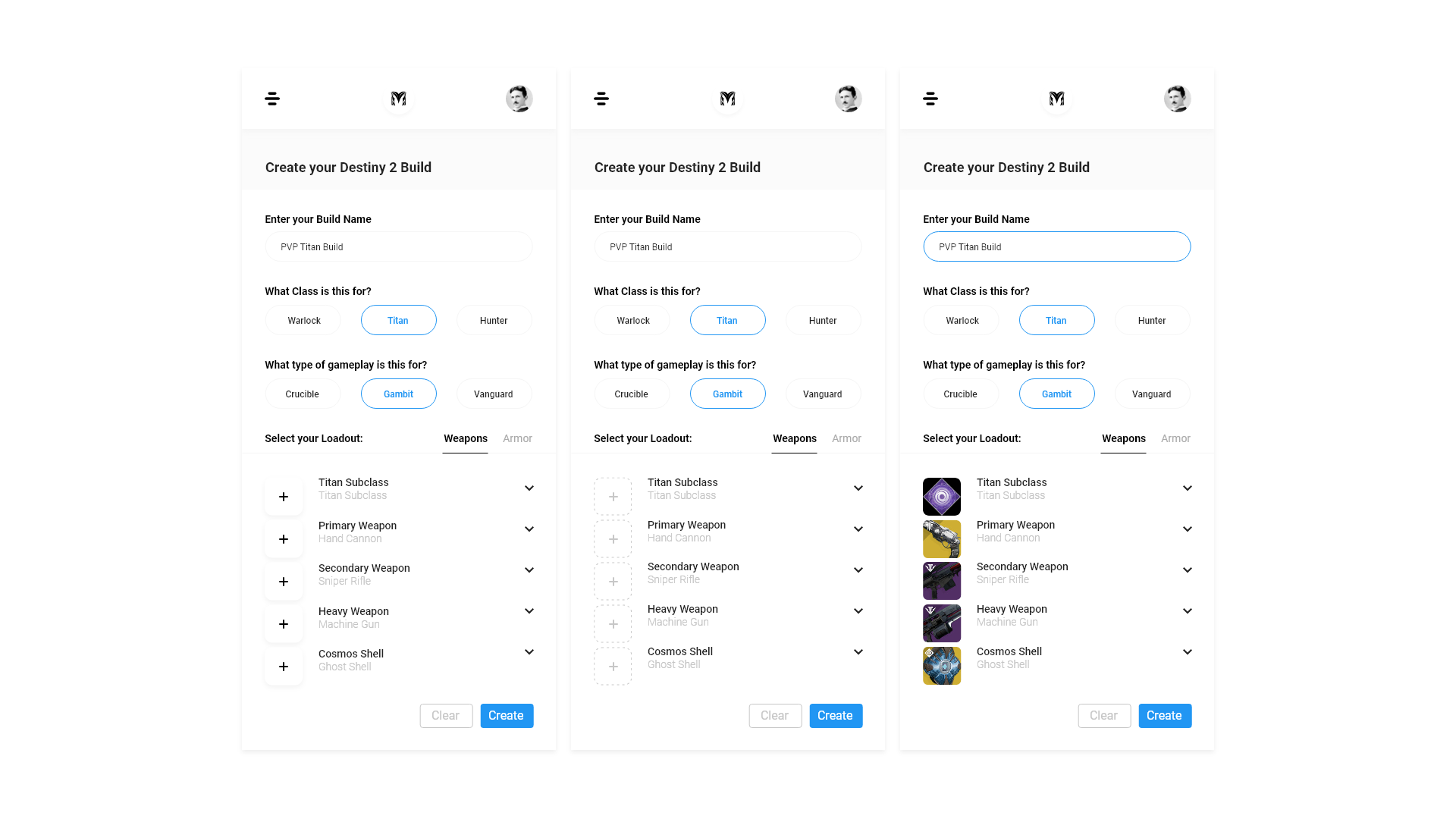 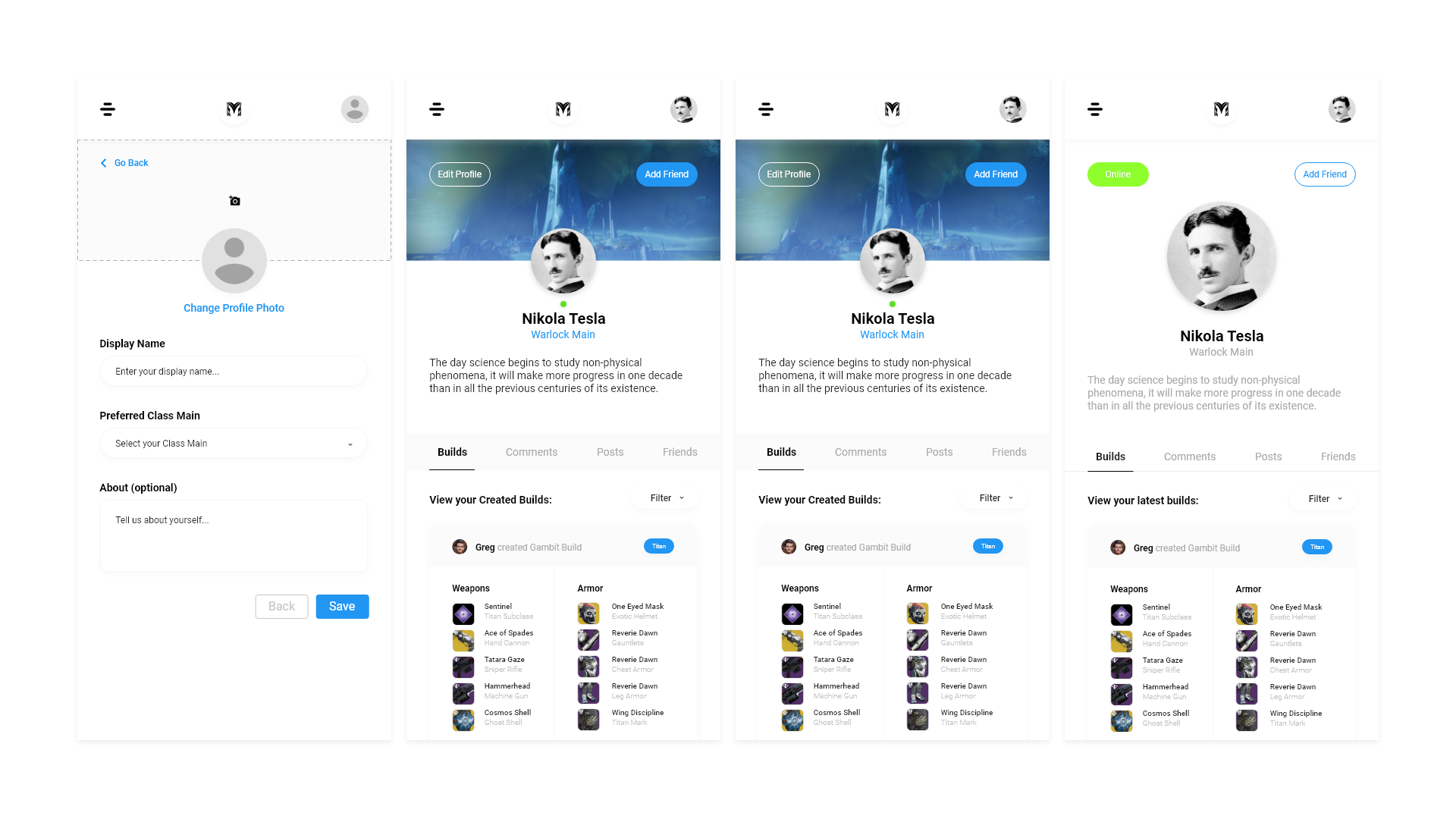 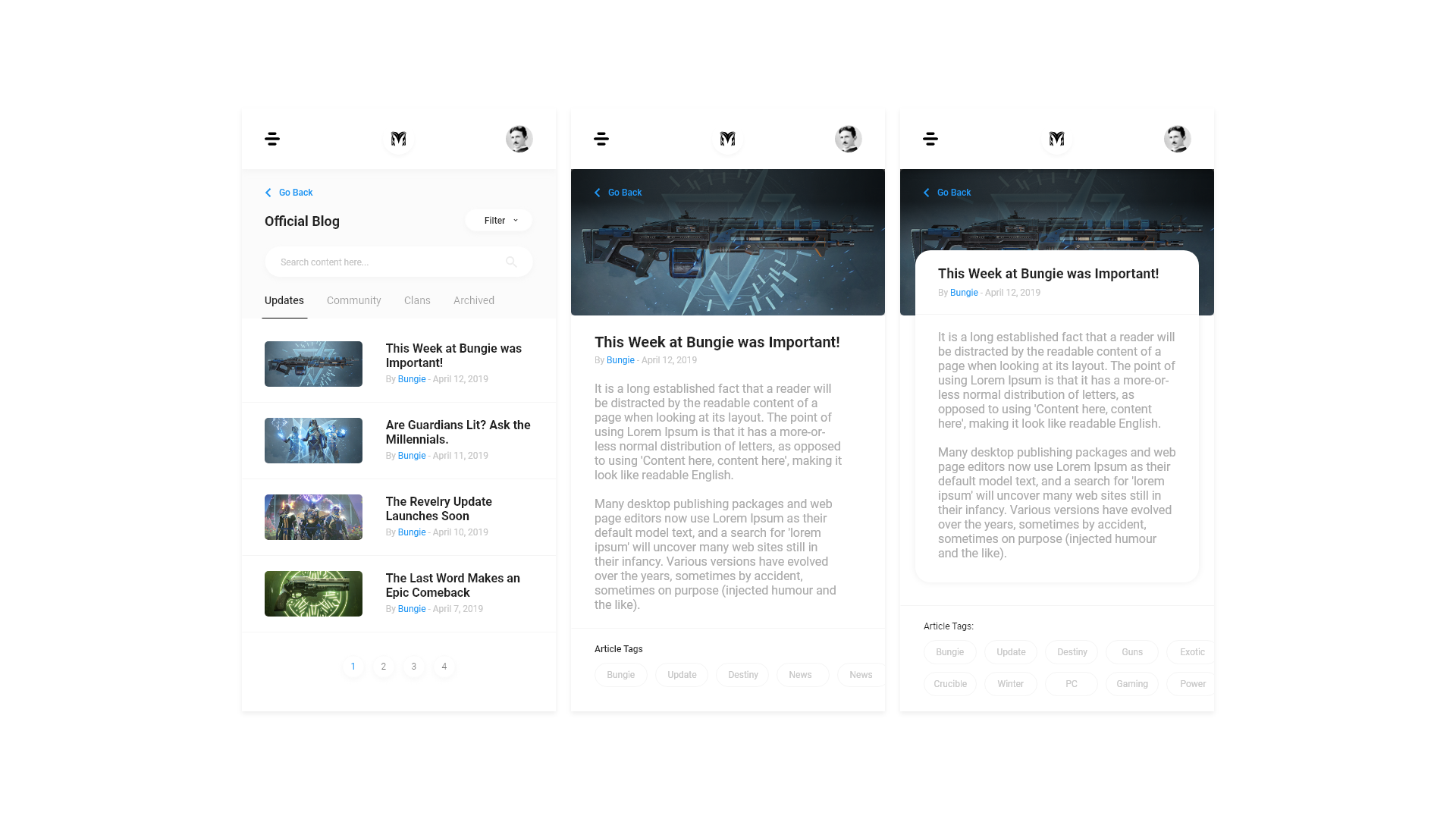 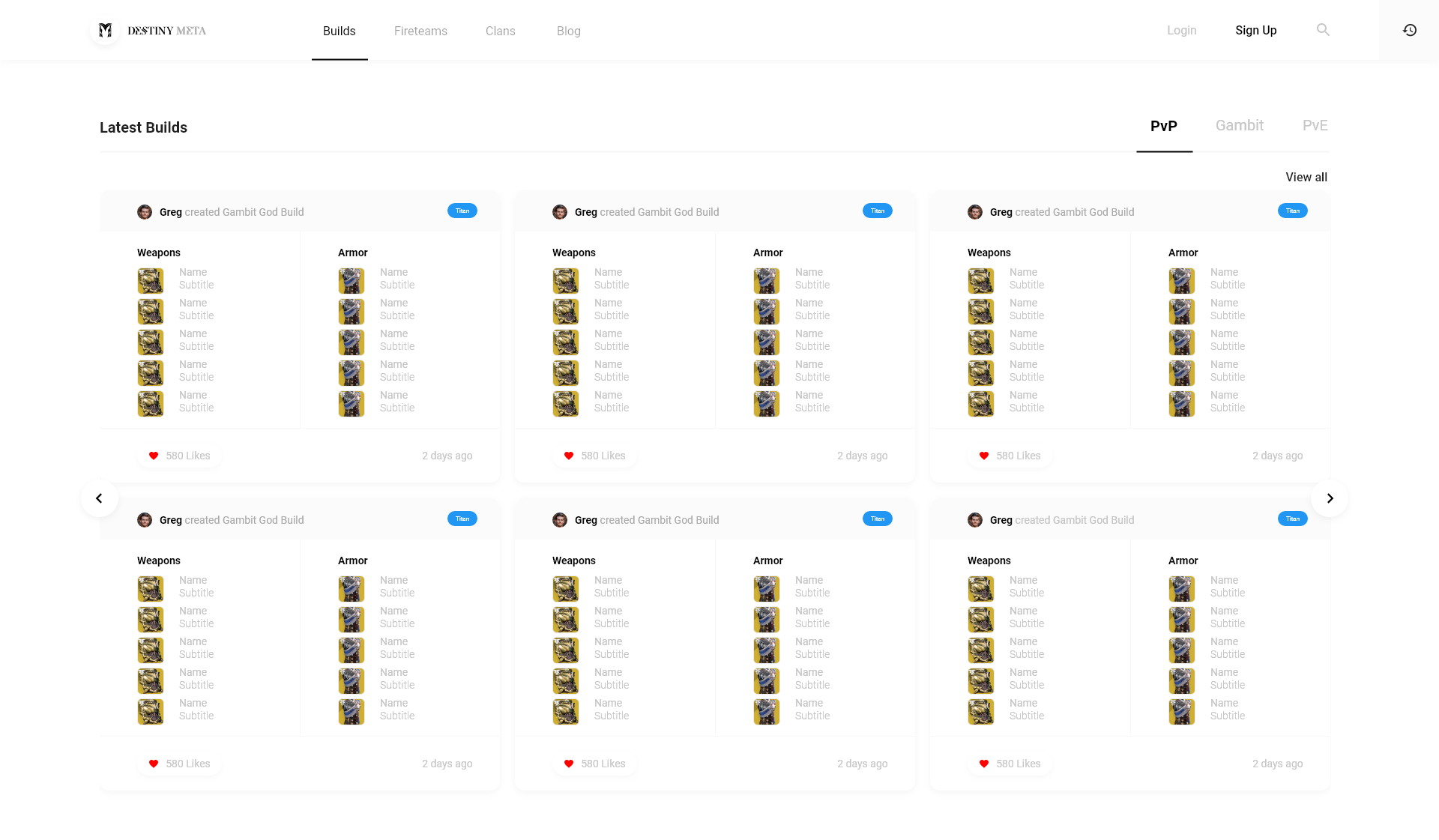 Click the image to expand into full view and see multiple iterations.

This logo was heavily inspired by a weapon called The Malfeasance in Destiny 2 and the letter "M" for Meta. More specifically, the inspiration came from the barrel of the gun which is jagged and spiky. The Malfeasance is an exotic weapon that is acquired by following quest steps and playing dozens of hours of a competitive game mode called Gambit. It's incredibly frustrating to acquire, but it looks... so darn beautiful. It also emits a type of dark energy and the bullets explode inside of its enemies. 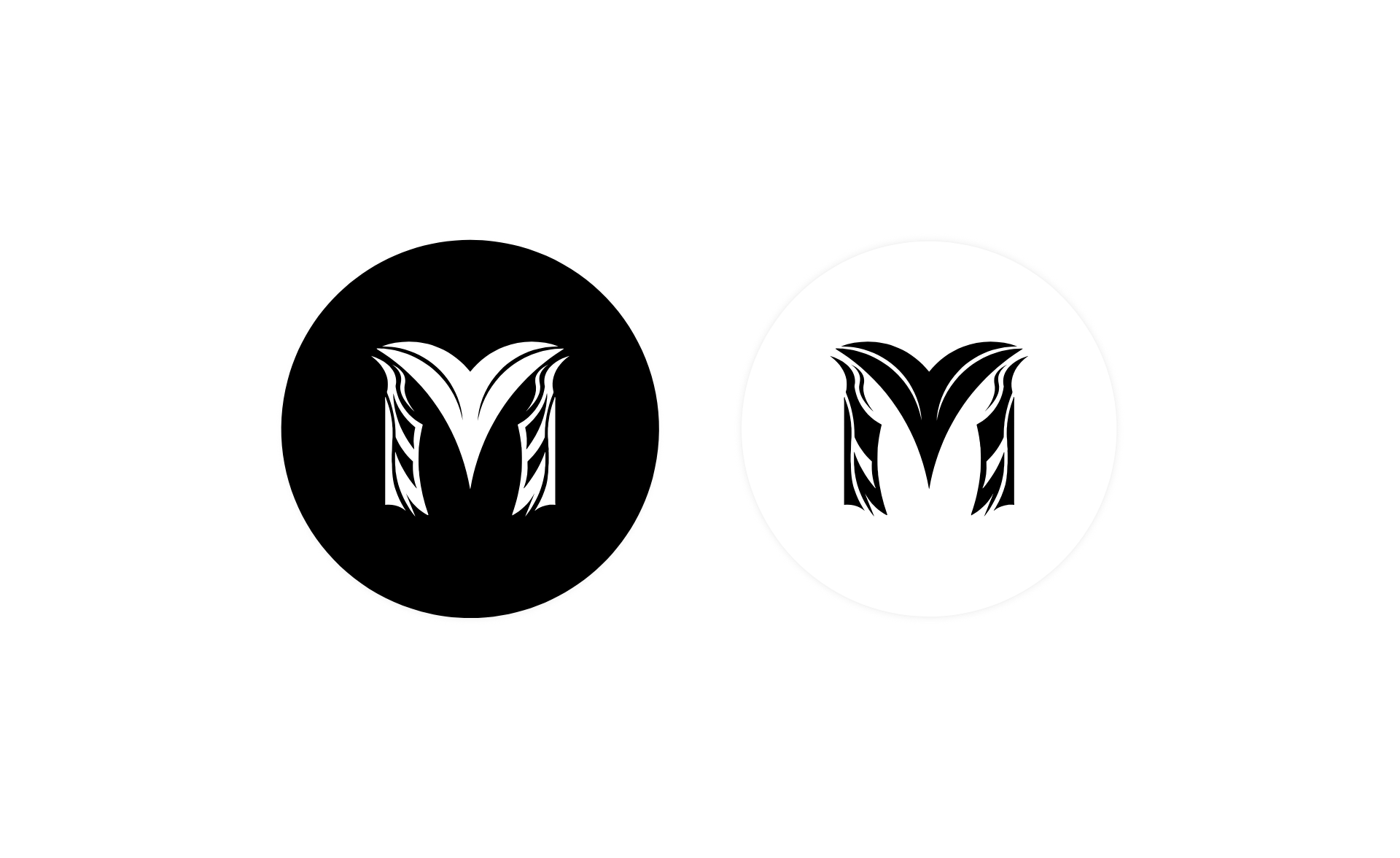 // 05 - PROJECT FEEDBACK
THE GOOD AND THE IMPROVEMENTS

Whenever I complete a project, I always perform a usability test with a few people and gather their feedback. Even for personal concepts so that I can see where users do well and where they tend to struggle. This struggle, and people will often times help me find a better solution immediately. Feedback and criticism has always helped me improve not only in design, but in all aspects of life.

"Great work on your project. Looks like you've been grinding, that's awesome. The depth of your work shows. Creative thinking throughout, research, overview, all the way through your design solutions. Great work dude!"

Improvements Needed
© 2021 Matthew Oliver. Made in Webflow while thinking of Rhinos.